The Dun Mountain Railway was officially opened amidst great fanfare on Monday 3 February, 1862. From the port, across the city, the horse-drawn tramway then climbed from Brook Street to a height of 2870 feet where it terminated at the chromite mines situated east of Nelson. It is known as New Zealand's first railway, although because some claim it is "just a tramway" this title has also been claimed by the Christchurch to Ferrymead railway, opened December 1, 1863. 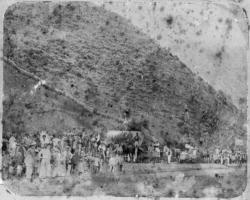 Early Māori quarried argillite for adzes and tools from Nelson's Mineral Belt (a strip of serpentine- rich ground running from D'Urville Island to Lake Rotoiti). European interest in the mineral deposits dated back to 1852 when copper ore was found. Mining engineer, Thomas Hacket, eventually pronounced the copper lodes to be worthless, however he did recommend mining the chromite deposits on Wooded Peak- a summit nearly two miles  northwest of Dun Mountain.

The chromite had been discovered by  German geologist Ferdinand von Hochstetter. In 1859 he climbed Dun Mountain as part of the Austrian Novara Expedition and named the olivine rock he found here Dunite. Dunite is a silicate rich in magnesium and iron and weathers to a rusty reddish or dun colour. Dun is the old English word for the colour brown. The flecks of black within rock samples are chromite. Dunite, serpentine and other ultramafic rocks are part of the Nelson Mineral Belt. Hochstetter stayed three nights in the Dun Mountain Company mine House, sited beyond Coppermine Saddle, during his Dun Mountain expedition (29th August - 1st September 1859), which was sited just below the current bike trail as it leaves Coppermine Saddle and enters the bush (825m).

Initially constructed to carry this chrome ore from the mines to Nelson's Port, the railway also provided a well-used passenger service between the Port and Nelson city for nearly four decades. When the Dun Mountain Railway Company applied for permission to cross Nelson's city streets with its railway lines, the Provincial Council and Government required the Company to run at least one public passenger train per day - New Zealand's first public transport. A new Railway Act required that the locomotives travel through Nelson at a maximum of four miles per hour.

Two Irish engineers with considerable railway experience, William T. Doyne and Abraham C. Fitzgibbon, were engaged to construct the railway which was to climb through heavily bushed mountainous country. Tons of railway track were shipped from England and more than 24,000 wooden sleepers were provided by local sawmills. Rolling stock, consisting of 20 knocked down wagons, arrived from England in 1861, with another 25 wagons arriving a year later, giving a capacity of 500 tons of ore a month. Horses pulled the wagons up the railway. 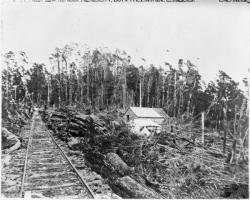 Scene at Dun Mountain, 1862, Alexander Turnbull Library, 1/2-160121-F [permission of ATL must be obtained for further use of image]
Click image to enlarge

The Dun Mountain Railway cost £75,000 to build and was so popular that by the end of February 1862, the Company advised people they could not ride up and down the line any longer - the wagons were required to haul ore to the Port. Horse-drawn along the railway up to the mines in the morning, gravity assisted the loaded wagons down the hill in the afternoon, with brake-men controlling the speed. Horses pulled the wagons to the Port. 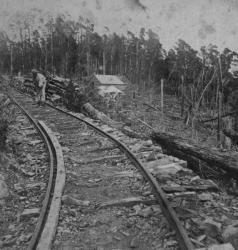 In 1862, 3843 tons  of chrome ore were extracted and carried down Dun Mountain by the railway, much of it coming from the Duppa Lode Mines on Wooded Peak - where evidence of mines and ore chutes remain on the hillside. However, only 1363 tons (1236 tonnes) were mined over the next two years and, in the autumn of 1864, it was found that only low grade ore remained in the existing workings. In addition, the American Civil War (1861)  had stopped the export of cotton from the United States to Britain and the Lancashire cotton mills, which used chrome to produce yellow and mauve dyes, eventually closed.

It was left to mining engineer, Joseph Cock, who arrived in Nelson in mid-1864, to inform the London directors of the Company of the true state of affairs. While Cock assiduously explored mountains, gullies and stream beds, he found the remaining ores were patchy and low grade. He discovered another deposit of high grade ore, which a four mile  branch line would access, but decided the cost of constructing such a line would not be recovered.

By January 10, 1866, Cock reported to the directors that the chrome deposits were completely exhausted and he had suspended mining operations: "Gentlemen, it is my unpleasant duty to inform you that the present condition and future prospects of your mine are extremely unsatisfactory."

The Company went into liquidation in 1872. But the last remnant of the railway - the horse drawn tram - continued to operate half hourly between Hardy Street and the Tasman Hotel at the Port until 1901. The line to the mines was finally lifted in 1907, but the route is still followed by the popular Dun Mountain Walkway.

Written by Joy Stephens, 2008, and published in Wild Tomato with the support of The Nelson Provincial Museum

Other features of the Dun Mountain Railway track

Carters Bridge
Carters Bridge was named after the contractor who built it, Robert Carter. The bridge was made of a cribwork of logs which soon began to rot, causing subsidence and increasing maintenance costs on the line. The logs were designed as a temporary measure to get the railway open to deadline and budget, with an intention to later replace them with concrete structures.

Third House
At strategic intervals along the railway The Dun Mountain Company had a number of “houses”. Third House (660 metres altitude), at Wairoa Saddle as it was then known, was halfway between Brook Street and the mines and included a wooden two-storeyed stable. The houses, initially probably construction depots, were later used for maintenance purposes and shelter for the railway workers. Many men who built the railway were unemployed goldminers, no doubt accustomed to tent-camp life and hard work. In total, around 200 workmen were involved in the construction of the railway, which was completed in less than a year using picks, shovels and wheelbarrows.

Junction Saddle
The converging tracks of earlier prospecting tracks – a railway route laid out by the Dun Mountain Company manager, Thomas Hacket, and a cartage track known as the Bullock Track – met the railway line at Junction Saddle (682m). The tracks that preceded railway construction accessed copper mines in Travers Gully on the eastern side of Wooded Peak. An early prospectors hut sat on the saddle but became redundant when Third House (660m) and Fourth House (810m) were built. Between Junction Saddle and Fourth House are several historic features including a major cutting through a sandstone spur, sandstone quarries, stone work, sleepers with dog spikes and bolts and a lime kiln and quarry that operated beside the railway.

Lime Kiln
Throughout the four-year life of the railway, mining was a stop-start affair due to fluctuating chromite returns. To keep the railway operating the company diversified into selling firewood, timber, gravel, flagstones and lime. The site of the company’s lime kiln is shortly before Fourth House and is marked with a post. Lime was quarried from a belt of Wooded Peak Limestone. It was used as a mortar and fertiliser. Price and demand fluctuated in response to the building trade and competition from the lime works sited at Port Nelson. The Dun lime works were still in operating after chromite mining finally ended in 1866 but by 1870 wagons could no longer access the upper part of the incline and the kiln closed.

Windy Point
The Dun Mountain Railway terminus (875m) was sited about 230 metres west of Windy Point where chromite was mined from the hillside above and loaded into wagons. Prospecting for minerals was carried out above and below the railway bench between Coppermine Saddle and Windy Point. Windy Point (845m) was originally known as Coads Point after Stephen Coad, who, in 1862, opened out a weak zone of mineralisation down-slope of the point for The Dun Mountain Company. Nearby Coads Creek retains his name.