Marlborough had perfect growing conditions and was noted for the excellent quality of its flax.1  Native flax (Harakeke/Phormium tenax) grew in swampy land and on the low foothills and, by the 1870s, the province was a principal exporting district.2 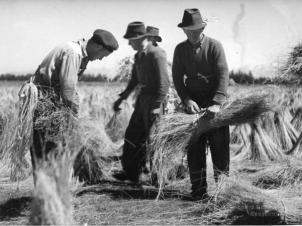 The processed flax fibre was stacked in stooks and dried and bleached in the sun. Marlborough Historical Society - Marlborough Museum Archives . 0000.900.0815
Click image to enlarge

Native flax (Harakeke/Phormium tenax) grew throughout New Zealand and was used by Māori for a range of purposes.  Māori were skilled in ‘dressing' flax (stripping fibre from the leaves) and bartered flax ropes and weaving for European goods.3

In the 1830s, Te Rauparaha and other Māori traded flax for muskets and gunpowder. His stronghold, Kapiti Island was a flax collection centre for the whole of the Cook Strait area.  Harakeke was not highly regarded in Europe, as it was brittle due to poor preparation, but it could still fetch £17-£24 a ton on the London market.4

The flax trade declined in the 1830s and it wasn't until the 1870s that improved flax stripping technology and a rise in its overseas price saw the industry revived.5

In March 1870, the Nelson Evening Mail reported an unprecedented and bountiful flax harvest in Marlborough with yields of 30-50 bushels per acre. " By 1870, many were involved in flax dressing, including a well known Māori chief, Rori who had a considerable quantity of flax land.6

At one time flax mills from Northland to Southland processed the fibre for ropes, woolsacks and carpets.7

Flax grew to perfection in the swampy, peaty soils around Tuamarina where hundreds of acres were grown. The first mill at the Marshlands estate, near Tuamarina, was built by Captain Samuel Bowler in March 1870. In 1888, John Chaytor rebuilt a mill at Marshlands which operated well into the twentieth century.8

Gilbert Sixtus at the flax mill at Omaka Valley - part of the Goulter estate. This mill was driven by waterpower from the Omaka River and the remains of the flume were still visible in 1961. The bundles of flax would have been cut from the stream edges.
Marlborough Historical Society - Marlborough Museum Archives 0000.900.0813
Click image to enlarge

There were several flax mills in the Havelock area where there was abundant flax. One such mill was established by James Rutherford in 1882 at Ruapaka. His son, Ernest was a pupil at Havelock School from 1882-1887.9

The industry's peak was between 1901 and 1918:10   "Flax again is an important factor among the local (Marlborough) industries; indeed, there are eleven flax mills and the total output for the season of 1903 was 7,150 bales of dressed flax.11

A major problem for the industry in the early 1900s was ‘yellow leaf' disease, which caused flax to die. Various remedies were tried but results were mixed. This problem, along with decreased demand, meant that by the 1920s the industry had declined.12

During the Second World War, linen was urgently needed for aircraft fabric and other goods and the New Zealand government promoted the growing of linen flax.13

In the 1939-40 season,  a superior crop of 100 acres of linen flax was grown in Marlborough and processed by Chaytors.  A further 1000 acres was planned for the 1940-41 season and farmers were encouraged to grow the crop on any spare land. Processing plants were set up in Alabama Road, Blenheim and at Seddon.

Between 1941 and 1948, more than 10,000 tons of fibre were exported from the South Island. However, Marlborough's linen flax industry declined after the war.14

Although it was once widespread, swamp drainage and clearing of vegetation meant  there were only small remnants of New Zealand flax by the end of the 20th Century,15 however with a worldwide trend towards natural fibres, researchers are again looking at the potential of flax.16

First the flax leaves (usually Phormium tenax) were cut, tied in bundles and taken to the mill. Then the leaves were fed through the stripping machine, which beat the flax leaf between a revolving metal drum and a fixed metal bar. A worker sat underneath the machine in the so-called ‘glory hole' to catch the slimy fibre and bunch it. Hanks of fibre were then washed in running water and hung out to dry and bleach in paddocks. About ten days later, the dry fibre was put through a scutching machine, which refined it further. Finally the fibre was packed into bales. Although most was exported, some was processed locally into ropes and cordage.17

The processing of linen flax involved uprooting plants and drying them, as with oats, then partially decomposing the straw in large tanks. This process, known as retting removed the organic material from the more durable fibres and wood. The retted straw was then passed under fluted rollers which separated the fibres from the wood and organic matter. Three products resulted: linen fibre, tow and wood which was used to power the factories.18