You are here:  Events » Abel Tasman and Māori in Golden Bay / Mohua

When the Dutch explorer Abel Janszoon Tasman sailed into Golden Bay / Mohua in 1642, a mutual cultural misunderstanding may have been one reason for the brief violent encounter with local Māori.

Abel Janszoon Tasman commanded a Dutch East India Company expedition to discover more about “South Land,” the great southern continent that included the already charted coastline of much of Australia.1 He left Batavia in 1642 with the ships Heemskerck and Zeehaen, making landfall at Mauritius and discovering and charting Van Diemen’s Land 2 before sighting Te Tai Poutini, the South Island’s West Coast.

By the time the Dutch had rounded Onetahua  into Mohua (Golden Bay) on the night of December 17, 16423 waka are believed to have followed them in the darkness.  The fires and smoke the Dutch crew reported seeing along the coastline are likely to have been a succession of signal fires lit by Māori of the dominant tribe, Ngāti Tumatakōkiri, warning settlements ahead of the approach of the strange ships.4

Gilsemans, Isaac: A view of the Murderers' Bay, as you are at anchor here in 15 fathom [1642], drawings and print collection, Alexander Turnbull Library, PUBL-0086-021
Click image to enlarge

The following morning Tasman sent small boats out to look for a better anchorage and a watering place and that evening the ships anchored somewhere off Wainui Inlet.5  Doubtless Ngāti Tumatakōkiri would have been assessing throughout the day the threat posed by the strange pale men and their vessels.6

Tasman’s journal records that four waka paddled towards them and that there were calls between the vessels. A warrior “blew several times on an instrument…we then ordered our sailors…to play them some tunes in answer.”

It has been suggested that cultural misunderstanding was at the heart of this first contact between Māori and European. Māori may have challenged the ships because they believed the white people were patupaiarehe, fair-skinned fairy folk or ghosts, who were feared because they took women and children away. The shell trumpets may have been blown to scare them away. Imagine the surprise when the ghosts apparently accepted their challenge.7

But it was when the Dutch fired a cannon, that Ngāti Tumatakōkiri must have really got a fright.  The resulting explosive boom has been described as a "sonic event" 8 and Māori fled in their waka back to shore.  Tasman's men kept a close guard overnight.9 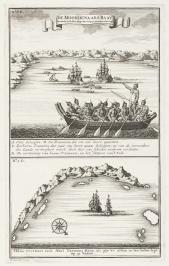 There have also been suggestions that Māori were simply guarding their territory from attack.  Ngāti Tumatakōkiri had crossed from the North Island to Te Tau Ihu (Top of the South Island) in the mid 16th century, becoming involved in skirmishes with other tribes already living there.  By the late 16th century the tribe was strongly established in various communities around Golden Bay / Mohua and as far south as Te Tai Poutini (the West Coast of the South Island).10

But Ngāti Tumatakōkiri was subjected to successive retributive raids from other tribes throughout the 17th century (and beyond into the 19th century) and was on alert.  So when strange vessels arrived with white men it is not surprising that communities would rally together to fend off a possible attack.11

There are a number of other factors that may have contributed to the violence that was to follow. The first is that Tasman arrived in the middle of the kūmara (sweet potato) growing season.  kūmara was a vitally important food source and one which Māori would have fiercely protected.12   Another is that the Dutch anchored close to the cove and cave of the taniwha Ngārara Huarau and it could be that the superstitious Māori were concerned about the intruders waking the spirit of the dreaded supernatural creature.13 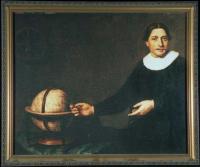 The large number of waka and paddlers recorded by Tasman in his journals also indicates more people than were understood to have lived in the immediate area were in the bay at the time.  Rather than the separate Ngāti Tumatakōkiri communities gathering because of the strangers in their midst, it is possible that Tasman happened to arrive in the middle of a large tribal gathering, perhaps a hui (meeting) or tangi (funeral). 14   Lastly, it is possible that stories of European seafarers and their harsh treatment of native peoples in the Pacific had already reached New Zealand and the arrival of men who matched their descriptions was met with a decision to make a pre-emptive strike against the potential threat stories the Dutch posed.15

The next day, December 19,  a waka returned, with its crew giving a “rough loud” call, possibly a haka  resulting from the exchange of ritual challenges the previous evening. Tasman’s men, misunderstanding the chant’s intent, unsuccessfully tried to encourage them closer, waving linen and knives and calling out. The Māori eventually returned to land and Tasman decided to move the ships closer inshore, as “these people apparently sought our friendship”.16

Before this could be done, two waka paddled out to the ships. While the Dutch crews continued encouraging the Māori to board, a small boat moved from the Heemskerck to the Zeehaen to warn its crew to be on guard and not to let too many aboard. On the boat’s return trip, a waka rammed it and a warrior clubbed Cornelis Joppens on the neck with a long blunt pike, knocking him overboard. Four sailors were killed and the body of one was dragged into a waka. Both waka sped back to shore as the Dutch fired at them with muskets and guns. Cornelis Joppens and two other survivers swam back to the ships and the boat and bodies were retrieved.17

Tasman decided to leave Mohua immediately “since we could not hope to enter into friendly relations with these people, or to be able to get water or refreshments here.”18

As the ships sailed for Cook Strait, eleven waka paddled towards them. A man standing in a large waka held a small white flag, possibly a peace sign, but as they drew closer, Tasman’s men fired, hitting and felling him.19

While Tasman had been warned of the possibility of attack, Māori had experienced a number of bewildering firsts – firearms, tall ships and white men. It would be more than 120 years before Māori and European next met, with the arrival  James Cook in 1769.21

Note -  In 2015 there has been renewed scholarly debate around the age of Taupo Pa, and the significance of Wainui Bay in the events of 18/19 December 1642 as shown in a 1705 engraving. References to articles discussing this is provided in the sources below

Want to find out more about the The first meeting - Abel Tasman and Māori in Golden Bay / Mohua ? View Further Sources here.

[Where no hyperlink is supplied ask at your local library about full text access to the articles.]