You are here:  Events » The Gathering dance festival

The Gathering dance festival was first held on New Years Eve in 1996 amongst the limestone karst, beech forests and rocky outcrops of the Canaan Downs on Tākaka Hill. It was a huge undertaking as large equipment had to be transported several kilometres along a winding metal road after conquering the equally challenging Tākaka Hill Road. Around 4000 people attended the first Gathering, a two-day festival for electronic dance music fans. The Gathering developed out of the Entrain series of dance parties in the region from 1993. 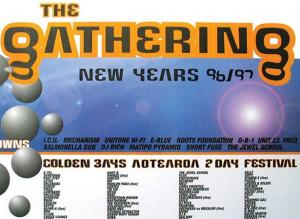 The first two festivals were organised by Grant Smithies, Josephine Cachemaille, Mel Rutherford-Dower, Tim Owens and Murray Kingi with a budget of $90,000. They relied mostly on word-of-mouth advertising and the Gathering was an immediate success.

Initially over 100 New Zealand DJs, and 35 acts provided live electronic music - marquees featuring different music zones with hard core house, drum'n bass, dub/hip-hop/reggae, trance and techno music. Ambient music also featured inside a sinkhole which provided a chilled out atmosphere for those weary from dancing. There were very few problems with behaviour with just some medical issues resulting from dehydration when hot and hypothermia when cold and wet. Everyone slept in tents when they weren't dancing.

The alcohol-free festival attracted teenagers and mostly people in their twenties from all over New Zealand and became the biggest youth festival of its kind in the country. The Millennium festival G2000 had 15,000 people (5000 holding fake tickets) and had several problems. There were traffic jams from the Kaiteriteri turn off to the Canaan Downs turn-off on Tākaka Hill, the weather was atrocious with rain falling for the entire event plus the eftpos system crashed. Tents were flooded or washed away and the Salvation Army was drafted in to deliver warm clothes. Police noted that the only thing preventing mass stampedes and pandemonium was the “loved-up” state of the crowd.

The following year the festival moved to the Cobb Valley and the length extended to 72 hours but the run had ended and the business was placed in liquidation in 2002.

An annual festival is still held on Canaan Downs. The New Year's Canaan Downs Festival continued to run until 2008 under different management. In 2008 the Luminate Festival, a "fire festival", was established, and has since then run annually in February. In 2011 the Canaan Downs Collective was formed and raised sufficient funds to purchase the land where the festival is held. It remains locally-owned as a cooperative, encouraging community participation and innovative environmental initiatives as well as running the Festival event.

Want to find out more about the The Gathering dance festival ? View Further Sources here.