You are here:  Your Story » John and Anne Batt

My great grandparents lived in two small adjacent villages in Hampshire:  Barton Stacey and Chilbolton – just three and a half miles apart.  Chilbolton, lies 18 miles north of Southampton and 11 miles from Winchester - a picturesque village with thatch-roofed houses.  John, an agricultural labourer, was 26 and Ann 21 years old at the date of their marriage.

While we know much about general conditions in England in the 1840’s we know little about the particular circumstances of the Batts or the Anthony’s. However, we know something of the background of Mary Knight (Ann’s sister-in-law) who accompanied them to New Zealand.  Her assisted passage with the New Zealand Company was only possible because as a “single woman without her parents” she had to be under the immediate care of some “near married relatives or are under engagement as Domestic Servants to Ladies going out as Cabin Passengers in the same ship.”

Mary gave her address as “New Street, Andover.”  This was a tough neighbourhood.  It is said that, during the 1840’s, the police would only venture down there in pairs.  The decision to emigrate was due to a number of factors.  One was the unsettling effect of the Industrial Revolution which, with increased mechanisation, forced many out of traditional work.  Conditions in the mills could also be dangerous and unhealthy.  In 1830 some 300 workers had assembled in protest at the conditions at the Tasker Mill and the Riot Act had to be read when they failed to disperse.

Another reason for emigration was the enticing picture that the New Zealand Company’s agents painted of New Zealand as a South Sea island paradise with plenty of cheap, fertile land where you planted your seeds and then stood clear!  A free passage, even to the other side of the world, must have been irresistible to anyone wanting to escape to a better life.

The agents, located in 52 strategic towns and cities of the British Isles, each received a commission of 40 shillings for every married couple and 10 shillings for every unmarried adult whom they managed to enrol in the Company’s books.  But it was still hard work.  There were other countries in the Empire competing for immigrants, so any disquieting information from New Zealand was suppressed.  In any case, if you could not read or write and were unlikely to meet up with any returned, disgruntled emigrants your source of trustworthy information was severely restricted.  If the Batts knew of any such misrepresentation it did not deter them.  John was a rural labourer whose skills would be valued in pioneering a new country.  While reluctant to leave his native soil during summer and harvest he found it easier to sign up during an English winter.

In the winter of 1841/42 John and Ann made contact with an agent of the New Zealand Company – Mr Gillingham. In the Company’s U.K. register of applications for free passage to New Zealand they were assigned numbers 5212 & 5213 (23rd February 1842), with a note that they “will be married if approved”.  They had less than a month to wait for that to happen and they were married on Saturday 12th March in the Church of England parish church in Chilbolton, Ann’s home village. It was only three months prior to their departure for New Zealand.

Before that happened there were many vital preparations to be made. All the necessary clothing and items required to live life in a new country had to be purchased (only the shipboard passage was free).  In total a married couple would require a minimum of ten pounds plus the cost of the fare from their village to Gravesend.  Vaccination was compulsory for all who had never contracted smallpox.

John and Ann were fortunate to be travelling on the Olympus – one of the vessels which had acquired a good reputation.  She was British built with a height between decks of six feet six inches – unlike some vessels which were only five feet eight inches high. Numerous books were taken on board as part of the provision and supplies.  With 134 emigrants, five paying passengers and 62 children there was a range of reading material:  some of the early explorers, two or three books on arithmetic, an encyclopaedia, some magazines and religious books – and six backgammon boards.  The ship’s surgeon was assisted by someone qualified to act as schoolmaster for the children and to also teach adults who wanted to learn to read.  A matron was appointed to help in the hospital. Sleeping, eating and below-deck recreation all took place in the one main area - unless you were a cabin passenger.

The Olympus left on time for Gravesend; the short journey from Deptford - the first step towards the open sea - providing a period for the passengers to settle and meet each other and a last opportunity to discover and correct any deficiencies.  She left Gravesend on 16th June 1842 carrying her precious cargo of emigrants in search of a better life-- most of whom had resigned themselves to the thought that they would never see the “old folks” or home again. It would have been like a journey to the moon but without sight of the earth hanging in the sky.

We have no specific idea of what happened to the Batts when they stepped ashore in Nelson on the 28th October, 1842, after a sea journey via the Cape of Good Hope of 13, 321 nautical miles taking approximately five months.  We know what the New Zealand Company said would happen as stated in their regulations.  They would be met by a company officer who would be “ready at all times to advise them in case of difficulty…and at all times to give them employment in the service of the Company, if for any cause they should be unable to obtain it elsewhere.”  From the experience of other immigrants whose actions were recorded we can only surmise that their experience would have been very similar.

Immigrants from the Thomas Harrison arriving in Nelson a few days earlier were housed immediately in marquees and barracks, and some families from this ship were very soon establishing small-holdings.  Some became squatters – often because of the delay in surveying legal titles.  It is very likely that John was employed by the Company, like many others, building the first roads in the district which were so badly needed.

Of course the intention of the company was not to make it too easy for everyone to own land or there would be no labourers for employment.  What became known later as a “sufficient price” for land determined this.  However, in Nelson things did not go “according to plan”.  At first there was a shortage of land to legally occupy because the surveying of the district was incomplete.  So even if purchases had been made in England, the ability to occupy was not possible and this compounded the unemployment problem for the growing number of labourers in an overcrowded settlement.  Then the Company found itself in financial difficulties and by 1844 had collapsed.  The death of Captain Wakefield and others in the Wairau threw everyone into great fear and alarm.  Eventually, when the panic had subsided, William Fox, who had assumed leadership of the settlement, was able to give labourers part time employment of at least two days a week.  He also allowed them to squat on vacant land.  Poormans Valley (Marsden Valley) in Stoke was settled in this way as the 1845 census indicates.

Ann Batt in her nineties. Image supplied by author

Food shortages at this time were common among the settlers.  Mr William Wadsworth of Wai-iti later told of the hardships caused by the collapse of the NZ Company:  “…We had to live as best we could for some time.  Our provisions were chiefly potatoes and salt, relieved occasionally by fish or pigeons.” Tea, sugar and flour were in very short supply.

Somehow the Batts survived.  The 1849 census shows John Batt as a tenant farmer leasing four acres: one to produce oats and one each for wheat, barley and potatoes.  They had obtained one cow and two pigs and had constructed a thatch roofed earth house.  Their family now included Mary Ann, Freda and Henry (Harry) – all born at two yearly intervals from 1845.

Saving for land of their own was a long and tedious business but by 1861, 19 years after their arrival in Nelson, they achieved their goal and were able to purchase 33 acres and two roods of land at Wai-iti about two miles south of Wakefield from the Rev. Charles Waring Saxton (brother of John) for 134 pounds. (In today’s values just under NZ$261,265). Charles, with his wife Mary and baby son, had accompanied John on the Clifford, landing in Nelson in May 1842,  but soon after their arrival Mary died and Charles returned to England taking his son with him.  The land which he had bought in England apparently remained unsettled until its purchase by the Batts. The block ran from the foot of the hills on the east across the valley to the Wai-iti river in the west. 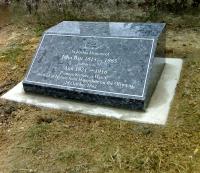 Gravestone of John and Anne Batt

Farming 33 acres was never going to be hugely profitable.  Many of the properties in this area were of similar size.  Some who later made a comfortable living grew hops and tobacco.  The Sheep Owners’ Returns of 1879 show that John ran 24 sheep on his property and this number was maintained for several years.  The annual lamb drop would have supplemented the family income.

Gradually the size of the farm grew with land acquisitions to the east and north.  Most of this was unprofitable hill country but, with hard work and powerful machinery in the 1960’s, was developed into pasture allowing more sheep to be run.  Some of the flat land was turned into a stone and pip fruit orchard before World War I.  During this time Burbank plums were planted and the farm adopted their name.  A small herd of dairy cows (about 10-11) were later introduced – initially milked by hand, the cream separated off and sent to the Brightwater butter factory, the milk fed to the household pigs.  When John’s sons William and George invested in some leasehold land at Glenhope, cattle were run on this back-country block, mainly covered in manuka and scrub, which later all added to the family income.

And increased income was needed for, as the years passed, the family had grown in size.  John, Emma, George, William, Ellen, Arthur, Laura and Alfred were born between 1851 and 1862 making a total of 11 children in all – a not untypical family size for this era.

John Batt died in 1885 aged 70 but Ann lived another 31 years reaching the grand age of 95 in 1916.  She is buried in the Foxhill Cemetery not far from her son George.

It had been a long and hard life in a new country far from home.  Did she ever miss her old friends and family?  No diaries or letters that we know of indicate how she felt.  We do not know if she or John ever regretted the decision to come to New Zealand.  They had been faced with an exciting opportunity and they had the courage to take it.  As one of their many descendants brought up with all the opportunities that life in New Zealand offers, we can only thank them for that.

Want to find out more about the John and Anne Batt ? View Further Sources here.