In 2007 youth were consulted on what youth facility they wanted to have included at Tahunanui Reserve when the Park area was upgraded. Rather than a skate park, they asked for a free BBQ area and provision of sheltered intimate spaces next to it that were interlinked and welcoming. The theme was ‘Home’. 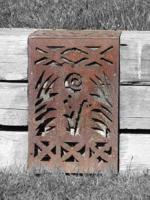 The Nelson Youth Council wanted the space to work not only for youth but for families and the wider community. The three year project is a testament to both youth and community commitment.

The Nelson Youth Council worked with Council staff, designers, and artists on an achievable BBQ area concept, with additional support from North Lions.

A stage for aspiring performers is enhanced by metal designs created by four local high schools. Two students were chosen from each school to work alongside artist Dean Raybould who manufactured the finished plates. Glass artist Frances Woodhead assisted by Tim Wraight and Tejas Arn worked with the Big Brothers Big Sisters organisation to create and install glass tiles around the BBQ pedestal. Young people and their mentors learnt tile design and manufacturing techniques as part of the creation process.

Tahuna Youth park was the first place in the city to trial urban art boards.

The Nelson Youth Councillors were passionate about the park and asked for stylish elements in the form of locally commissioned artwork to be included. They wanted pieces that were ‘sturdy and durable - that you could run around and interact with, not shiny and untouchable’.

They also wanted the art to blend into the local environment and relate to the theme of ‘Home’. In response to the brief the main sculptures have been made from recycled heritage timber from the region. Timber has come from both Port Nelson and the old Awatere road rail bridge in Marlborough.

A group of artists was sought to work collaboratively with each other and the Nelson Youth Council and a series of gateways that would mark transition points to each separate area were designed. The combination of wood, stone, glass and metal created a natural palette in keeping with the landscape.

World by Grant Scott. ‘I envisioned this piece to represent the aspirations of youth as they journey out to discover the world. The 'world', made up of intertwining metal strips symbolises a unification of diversity, as our young people embrace the world and humanity amidst all its challenges’.

Portal by Sean Walker. Sean describes his work as a magical doorway that connects two different locations. ‘When I made this piece I was thinking about the fragile position of the sphere, which for me reflects the visions and challenges that exist for every new generation. This sits like a keystone between the two areas in the park. Time is referenced by the tide mark carved into the work’.

One of the posts from the Ocean Dreaming sculpture installation by Adi Tait. Nelson City Council
Click image to enlarge

Ocean Dreaming created by Adi Tait is a series of ‘totem’ posts with coloured eyes made from acrylic, steel and reflector disks. The disks were placed in such a way as to be read as braille, spelling out the words Ocean Dreaming. These individual posts curve in different directions and change height just as the waves in the sea and every young person growing to adulthood.

Freddie’s Front Door by Darryl Frost. ‘The inspiration for this work comes from watching The Flintstones on TV in my youth. It symbolises an entranceto new beginnings and experiences - a transitional point to leave your worries behind, a symbol of strength and hope for all. My hope is that this sculpture inspires all to dream dreams and smile for just a while’.

The Postcard from Nelson art work by Hamish Betts was chosen by Nelson Youth Council as an addition to the Youth Park and installed in 2015. Complete with cut out spaces for people to pose in, it depicts a beach view looking back to iconic landmarks of Nelson.

Hamish Betts is a Nelson born and bred Muralist. He started his career in 2000 by decorating the shop windows of Nelson every Christmas, with colourful illustrations of Santa during his School holidays. At that same time he began painting murals. His first was the ceiling of Renaissance Hair Salon, followed by several smaller commercial ceilings and murals. It was not long after this, that he began travelling the country, painting commercial murals and designing 3D environments for Chipmunks Adventure Playgrounds and designing children's bedrooms. He was influenced by the immersive environments found in places that did children's imagination well, such as Disney theme parks and stores. In 2015 he is employed as a full time Art Teacher, Pastor, and illustrator in Singapore.

Whilst designing the 'Postcard Mural' Hamish spent time considering the Nelson he grew up in.  He remembers exploring the low tide mark at Rocks road collecting shells and sea-life in a bucket, and running in the Sand dunes that used to run along Tahunanui beach. He draws on a range of influences, from modern illustrators and print-makers such as Jon Klassen, to the shapes and patterns on indigenous artwork and cultural patterns of Maori and Pacific artwork.