You are here:  Enterprise » Wakamarina Gold

"In the month of April, 1864, Nelson was aroused from the most depressed commercial state....to the glittering prospects of a well-paying goldfield...situated in the Province of Marlborough," reported Lucas's Almanac in 1864.1  At the peak of the gold rush, approximately 6000 gold prospectors were working around Canvastown and 25,000 oz of gold were found in the first year of prospecting.2

In August 1863, the Marlborough Provincial Council offered bonuses for the discovery of gold and coal in the financially struggling province.  In April 1864, John Wilson, Joshua and George Rutland and Hirram Harris, found an encouraging amount of gold at Wilson's Beach beside the Wakamarina River.3

Wilson and his party successfully claimed the bonus and are reported to have found 54 oz  (worth £210) in their first few days of prospecting.4 Thousands soon flocked to the area from Nelson, the Wairau and goldfields further afield.

Lucas's Almanac5 reported the scene on the Maungatapu Track: "As I returned to Nelson yesterday, the 32 miles of road teemed with parties....I saw two young lads, one about 12 years, the other say 10 years old; and at the foot of the hill, I met a man with an umbrella in his hand, and swag at back."

The Wakamarina was proclaimed a goldfield on 11 June 1864 and the gold rush transformed Havelock into a bustling boomtown in the space of two months.6  Tents sprang up at Havelock, Canvastown and settlements up the Wakamarina River.   Publicans and merchants arrived to assess business prospects and accommodation houses and stores mushroomed.7

The Wakamarina yielded 5000oz of gold in the first four to five weeks.  Gold was steadily recovered from the river claims, mostly using sluice boxes.   However, while miners continued to arrive during the winter, many failed to secure claims, some left disillusioned, and floods drove others away.8

On 16 January, 1865, the Havelock Mail reported: "It cannot be concealed that the thousands who visited us in the last eight months have left the province altogether. The people of Havelock are now at their wits end what to do."9

The Wakamarina's easy gold was worked out within a year and the gold rush was soon over. After the rush subsided, mining was increasingly dominated by shareholder companies.  For example, in January 1880, a small local syndicate formed the Wakamarina Hydraulic Sluicing Company which held a lease for 10 acres near Wilson's Beach. However the gold was patchy and the company was sold in August 1881.10

In the 1890s, dredging mania swept New Zealand.  Although several dredges operated in the Wakamarina River, the returns were generally mediocre.  The most long-lived dredge was the Golden Point Dredge, which was commissioned in July 1901 and worked the river between Muttontown Creek and Quayle Stream. There were some good results from dredging, but returns were variable and by 1904, the Golden Point Dredging Company had lost about £10,000.11

From the late 1860s, the search was underway for the quartz reefs from which the alluvial gold had been shed. The Golden Bar at Dead Horse Creek was discovered in 1870, but the reef was not systematically worked until 1910 when a battery was constructed by the Dominion Consolidated Development Company.12 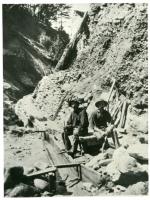 Holga Rasmussen and Joe Grigg working on the claim at Cleyne’s Flat on the Pelorus side of the Wakamarina River. There is a tramline behind the race for wheeling out the stones. Marlborough Historical Society - Marlborough Museum Archives

The battery's stampers pulverised the quartz mixed with water into a paste and the gold was extracted using mercury. During World War 1, demand for scheelite  increased the profitability of the mine. The Golden Bar workforce grew from about 12 in 1910, to nearly 100 men five years later, and a small township sprang up near the battery. Over 12 years, nearly 14,000 oz of gold (£55,233) and 440 tonnes of scheelite (£58,458) were extracted.13

Want to find out more about the Wakamarina Gold ? View Further Sources here.