You are here:  Arts » Nelson Pottery

There is some evidence that the use of clay may date back to early Māori settlement, but the history of clay use in the Nelson region is a European one. Brickfields were in existence as early as 1842 and many brickmakers and bricklayers were listed among the early immigrants. As building began, clay mining and brick making were widespread activities throughout the region.1

While clay was used for bricks, insulators, tiles and flower pots, there was no clay suitable for throwing pots when Czech refugee, Mirek Smisek, arrived in Nelson in 1952.2  Smisek was the first fully professional studio potter in New Zealand, teaching pottery and producing his own work from 1956.3

To blend a suitable clay for potting, Smisek sought the help of Ian McPherson who, with his father William, had clay mining licences in Golden Bay and on the West Coast. McPherson experimented for a year to produce a suitable potting clay.4

The philosophy of English writer and potter, Bernard Leach, regarded as the father of British studio pottery, had considerable influence on Nelson's studio pottery scene, with Smisek being an admirer.5

Cornish potters May and Harry Davis also incorporated Leach principles in their work.6 In 1962 they emigrated to Nelson, on hearing about the raw materials available for pottery, and established the Crewena Pottery at Wakapuaka. Soon their domestic ware was setting new standards in New Zealand's rapidly expanding pottery movement.7

Jack and Peggy Laird arrived from England in 1964, part of an influx of people from the northern hemisphere looking for a better life. They established Waimea Craft Pottery which employed 17 potters at its peak.

The Lairds set up a Labour Department-approved apprenticeship scheme which offered many potters training in a workshop environment. Well known Brightwater potter, Royce McGlashen served a five year apprenticeship at Waimea, during which he estimates he threw thousands of pots.9

Between 1956 and 1976, the number of studio potters multiplied nationwide, with Nelson eventually having the most potters per head of population and gaining an international reputation as a centre of excellence in studio pottery.10

By the mid-1970s, pottery had become an important part of Nelson's economy.  Tourists looking for unique gifts and souvenirs, as well as restrictions on imported pottery, meant many local potters were able to sell their work with ease.11 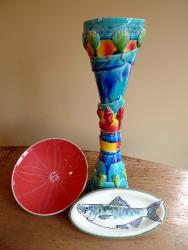 Pottery was also a popular hobby. In 1954, Smisek taught five classes a week at the Nelson Technical School.  In the 1970s, Waimea College provided funding for twelve classes in the Tasman region.12

In 1973, Craft Potters was established in a Hope orchard by a group of amateur enthusiasts.13 By 1975, Craft Potters had 140 members and was operating five fulltime classes. There were three pottery groups in Nelson city alone.14 Pottery clubs offered a creative outlet and became a focal point for a hobby that some turned into a job and a way of life.15

Nelson's pottery industry has been commercially viable from the earliest days.16 Cheap pottery imports have had an impact, but Nelson remains renowned for its pottery and ceramics, and pottery continues to grow as a vital and innovative, creative industry.17

Pre 1840 - Māori use of clay
Kokowai obtained from clays rich in iron and aluminium silicates, was highly prized by Māori; depending on chemical composition, reds, oranges, yellows and browns were produced. Onekaka and Parapara in Golden Bay were important resource areas. The clays were dried and ground, then mixed with oil for personal adornment and to decorate (and preserve) waka, buildings and tombs. The former died out soon after European settlement, perhaps because of Pakeha attitudes.

Shaped and fire-hardened clay objects have been found in Māori occupation sites, but only in the Auckland and Northland regions.

Post 1840: European settlement – clay and brick making
In the Nelson area European settlers started to mine and use the clay soils found in the region more intensively.  Large quantities of bricks came over as ballast in settler ships, but with growing demand, brickfields were established as early as 1842 and many brickmakers and bricklayers were listed among the early immigrants. With an increase in building, clay mining and brickmaking were widespread activities throughout the region.

1960s – a growing community of potters
Chris and Sally Du Fresne of Mapua establish their studio. Other potters arriving in the area include: Christine Bell-Pearson, Christopher Vine, Dr Elsa Kidson, Howard and Diana Macmillan (followed by their sons Michael and Hugh) and Robert Wallace.

1970s – a boom time for pottery in Nelson
Strong links are forged with the Suter Art Gallery under Austin Davis. Waimea College provided funding for twelve pottery classes in the Tasman region (started 1958 by Smisek)

1990s/ 2000s – a mixed period
Imported ceramics have an impact, but pottery becomes an established feature of regional “craft tourism”.

Want to find out more about the Nelson Pottery ? View Further Sources here.