You are here:  Places » Maitai Valley

The Maitai Valley to the east of Nelson city is a popular recreational area, with numerous picnic and swimming spots. These include Black Hole, Dennes Hole, Sunday Hole, Sharlands Hole, the Maitai Reserve and Smith's Ford. Nine kilometres up the river is the Maitai Dam, Nelson's main water supply.

The Maitai is a great playground for Nelson, as well as being the main source of Nelson's fresh water. And if you think it all ends at the golf course - think again. The council-owned land extends over 10,000 hectares up the Maitai Valley, and beyond to the Brook and Roding reserves in adjacent valleys to the south and west. 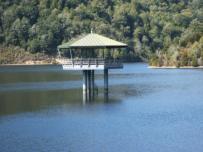 The Dun Mountain, at the heart of the Nelson Mineral Belt, is one of the most geologically interesting areas in New Zealand. Its diverse minerals also mean it has an interesting history - from early use by Māori as a source of argillite adzes, and in early European settler times as the centre for hopes of wealth from copper mining.

The Nelson Mineral Belt consists of heavy ultramafic rocks such as serpentine, which formed the ocean floor and were thrust into the crust of the Gondwana super-continent some 280 million years ago. New Zealand is a small fragment of Gondwana that began breaking apart about 100 million years ago.

Argillite, known to Māori as pakohe, is a tough but workable rock that starts out as mudstone, before it is heated and compressed within layers of serpentine, causing a chemical reaction. At the Rush Pool quarry you can also see the layers of green glassy serpentine. The superior quality of Nelson argillites made them highly prized - they were traded by local Māori, while Māori from elsewhere travelled to Nelson to acquire stone for tools.

The first argillite used by Nelson Māori was probably from rocks washed down the Maitai river. After these easier finds were used up, it was time to hunt for the source, well up the Maitai Valley. The Rush Pools, which leads off from the Maitai Dam, takes you up to this source: a stone age site, just a stone's throw from a modern city. The argillite was worked into stone tools; in skilled hands it was shaped by flaking. Large hammerstones - some of granodiorite obtained from the Boulder Bank - were carried up to the site and were repeatedly dropped against a particular spot on the argillite outcrop until it fractured. The argillite was then further broken and flaked into smaller shapes.

The quarry is an unusual and valuable site, highly regarded by Māori. It should be treated with respect, and visitors should conform to the Māori practice of not eating food in a sacred place. 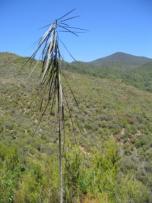 The high mineral content of the soil gives the Dun Mountain its sparse and stunted cover of vegetation and characteristic reddish brown rock-strewn landscape; with early Māori possibly also having burnt off the vegetation on these slopes. The combined effect creates the open appearance noted by the first settlers, who called this ridge Bare Spur.

'Wilding pines' are a problem in the Maitai valley. These self-set trees are a menace and will destroy the fragile ecology of the mineral belt and modify the landscape and historic sites, if not kept in check.

"We have to assess the greatest threats to this area and decide on management targets that are achievable and able to be sustained over time," says Council Asset Development Adviser Paul McArthur. The wilding pines on the front face of Dun Mountain and around the Rush Pools were cut down in 2009, with the programme concentrating in following years on Mt Malita in the Roding catchment.

It takes specialised plant species to survive on the heavy metal concentrations of the Mineral Belt, but it is home to over 28 plant species that are threatened, rare or with a restricted range. These include ultramafic tussock, a small gentian, scree plants, a forget-me-not, a serpentine Olearia and a hebe that is restricted to this area. Some of the vegetation is nationally rare and contains a large number of threatened plants.

The Maitai Cave walk takes a southern turn into the limestone area of the mineral belt. The limestone has been tilted to vertical by earth movements, making channels for water that carve out cave formations. These have their own unique insect and plant life including a rare limestone kowhai.

Tantragee arboretum sits alongside the Maitai River on the route to the Maitai Dam. The idea for the Arboretum was first proposed in 1979. Converting the 14 hectare block, from gorse and weeds to a carefully arranged palette of deciduous and evergreen trees under-grazed by sheep, would complement established amenity plantings in the valley and create a much needed fire break between Sharlands Hill and Fringed Hill.

In February 1981 a disastrous fire started in the Tantragee saddle area and swept onto Fringe Hill and the Hira afforestation areas. In 1983 the arboretum proposal became a reality as a joint New Zealand Forest Service and Nelson City Council project. Private forestry companies continue to support the arboretum. Today there are over 50 species of trees; deciduous species chosen for autumn display, conifers for contrast, other species for scientific interest, timber quality or flowers and fruit.

Tantragee is the name given to the arboretum and the Saddle adjoining Brook Valley. Early settler John Kidson had a property in the Brook Valley which was referred to as Tanderagee in newspaper reports of the Dun Mountain Railway construction. This was probably the source of today's name Tantragee; possibly a corruption of Tanderagee, a small market town in Armagh Ireland. In Belfast, within St Patrick's Church of Ireland Cathedral, stands a stone statue known as the Tanderagee Idol. Visually powerful despite its two foot height, it is said to represent the early Celtic ruler, King Nuadha who had his battle-severed arm replaced with one made of silver.

There is a range of walks and mountain bike trails in the Maitai Reserve. It is possible to walk up the Dun Mountain and descend via third House to the Brook Valley. The Brook Waimarama Sanctuary fence off a nature recovery area, but walking connections to the Maitai and beyond will remain:

This article first appeared in LiveNelson in 2009. Updated Jan 2021