You are here:  Your Story » Hop Harvest

March 1st is a significant date in the Nelson district because it heralds the start of the hop harvest.  The hot, dry summer has ripened the flower cones of Humulus lupulus  that have been used for the flavour and bitterness in beer for at least 1,000 years.

Hops were grown here from the earliest years of settlement.  Many of the 1842 immigrants came from England’s southern counties and Kent - the centre of hop production.  At first they trained the hops on poles – just as they had done at home, here using Manuka and Totara stakes.  The hops were planted between two poles and three bines were trained around each pole.  There are two contenders for the development of the post and wire system which eventually became the standard for the district.  George Higgins, son of Sarah and Sydney at Mt. Heslington  is said to have seen a photo of a Californian hop garden using this method and began using it on his farm. Jess Roborgh in the book Back Then – threads from Motueka’s Past, credits Daniel Drummond for the introduction of the post and wire system in the 1890’s and comments that it took some time to catch on. The new system was easier to harvest by a stringer, who cut the hops near the wire with the hop cat or sickle lashed to the top of a long pole, but if there was heavy rain near the time of harvest and if a pole or wire collapsed, many plants could be brought down, spoiling the crop. 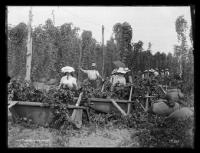 Until the early sixties there were numerous  gardens in the district: Motueka, Riwaka, Dovedale and the Wai-iti Valley south from Wakefield to Spooner’s Range and Tadmor.  Picking was labour intensive by hand into hessian bins, usually by women and older children.  It was a great social occasion.  In a large garden there could be up to 80 workers. Pickers were paid by the bushel (a dry volume measure equal to 36.37 litres) and it was possible to pick 85 bushels a day, although the average was about 40.  Payment ranged from two pence per bushel to one shilling. You earned a reputation for being a clean (few leaves) or a dirty (many leaves) picker. Workers came from all over the country, principally Wellington and Christchurch, and would live in old houses or batches on the farms. It was a great end of summer working holiday and there was plenty of social activity in the evenings.

When machines took over in the sixties, the labour force dramatically reduced and a part of agricultural life that many older people today will look back on with fond memories, disappeared.

This story was first published in "Windows on Wakefield" a community newsletter for the town of Wakefield, Nelson. Also published in the Waimea South Historical Society book "The way we were".

Want to find out more about the Hop Harvest ? View Further Sources here.