A busy settler in early Marlborough and Nelson

Dr Thomas Renwick was born in Dumfries, Scotland in 1818, trained as a doctor in Edinburgh and undertook a voyage to India and back in 1840-41 as the ships’ doctor. On May 26, 1842, he set sail for Nelson on the New Zealand Company ship Thomas Harrison. Under his steady and methodical hand, there were only two casualties during the long and hard voyage. The Thomas Harrison arrived in Nelson in October of the same year.1 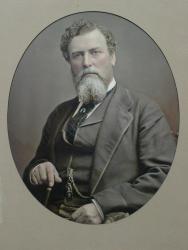 Later in 1842, it is believed that Renwick helped a young Chinese ship’s steward, Appo Hocton , who was charged with desertion from the Thomas Harrison and sentenced to 30 days in the ‘house of correction’ on Church Hill. Family stories persist that he was freed without serving his sentence, possibly assisted by Renwick.  In any case, in 1843 Hocton began working for Renwick as a housekeeper, saving enough money to buy a bullock and cart and setting up his own business.2

Dr Renwick set up a medical practice in Nelson and used his modest profits to buy livestock: cattle, pigs, ducks and merino sheep. He also supplied money to George Hooper, a passenger from the Thomas Harrison, to establish the region’s first brewery.3 Despite several changes of name and ownership, Hooper and Co. was a stalwart Nelson institution until it was finally bought out by DB Breweries in 1969.4 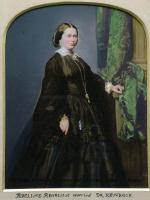 In the years that followed, Renwick became an influential Nelsonian. In 1849 he was appointed a trustee of the Free Church of Scotland in Nelson, after helping to build the first Presbyterian Church in the region.5

He had married Adeline Absolon on August 11th 1846. Adeline was a wealthy woman, but of "dubious reputation",6 however her money allowed Thomas to first lease, then purchase, a large amount of land in the Awatere in 1848. He named this 8500 hectare parcel of land Dumgree after his home in Scotland.  He went on to buy the Delta Dairy (originally owned by the Honourable Constantine Dillon), a 4800 hectare run at Waihopai in 1855. While Renwick lived in Nelson, he spent much of his time travelling around to survey his Marlborough properties.

Dr Renwick was noted for his meticulous scientific mind, which he applied to all things, including farming; he left detailed notes for his staff on how to complete specific activities on the farm.7

In the years that followed, it became apparent that Renwick wanted a self-sufficient and self-governing region of the Wairau - separate from Nelson. In 1853, while a member of the Nelson Provincial Council, he, along with other Wairau settlers, pushed hard for the establishment of a separate province of Marlborough, which they achieved in 1859.

In 1860, Adeline had an affair and left Nelson for London. Dr Renwick visited her there a couple of times over the next few years, but she did not want to return to New Zealand, despite deteriorating health. The couple signed a deed of separation and Adeline died in May 1870.

After visiting Europe to see his family, Renwick returned to New Zealand some time in 1862-1863, and was summoned to the Legislative Council in Wellington in October 1863.8  He was a senator in the Upper House of  the New Zealand Parliament until his death in 1879.9 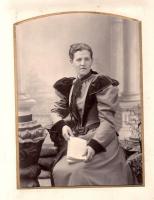 In the meantime, Dr Renwick had sold his medical practice and income from the Wairau properties was diminishing due to scab infestations. There were also disputes over Adeline's property and possessions.10

Things improved for Thomas when he met and  married the young Anne Smith11 just after New Year’s Day 1872.12  This was a much happier marriage. 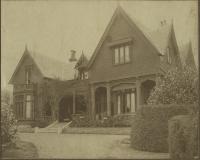 They bought Newstead in 1877. It was Thomas' home for just two years, but Anne lived there until her death in 1937, at which time, the Government bought the two-acre property, renaming it Renwick House. The house and surrounding grounds became part of Nelson Central School.

Thomas Renwick died on November 28th 1879 and is buried in the old Presbyterian section of Nelson’s historic Wakapuaka Cemetery. Renwicktown would later be renamed Renwick and sits on the banks of the Wairau to this day.

Dr Renwick left Dumgree to his nephew Tom, but he refused to take it over. Anne Renwick became the owner. In 1918 Tom changed his mind and Dumgree became his. On his death it was inherited by his nephew. It was finally sold out of the family in 1977.13 Mrs Anne Renwick died in Nelson in 1937.14

The Marlborough Museum holds photographs, clothes and about 700 letters relating to the Renwick family.15  You can read excerpts from some letters here: a story which adds more information about Thomas' family life.

Elisabeth Airey, historian, has continued to research the life of Anne Smith and her family, including Thomas Renwick - see her latest publication: For the sake of my daughter.