You are here:  Your Story » Marj Matthews of Redwoodtown

Marj (Marjory) Matthews, who died on 15 February 2011, had a good nose for business and a keen eye for property, and was the driving force behind the development of the Redwoodtown shopping centre.

On returning from World War II in 1943, Russ Matthews was offered promotion by his employers, the Union Steam Ship Company. He took his new bride, Marj, to Napier to check out the position, but she refused to get off the train. With no prospect of promotion if they stayed in Blenheim, the Matthews established the Redwoodtown Grocery Store in 1947. 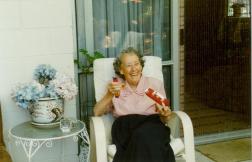 It was a gamble, as there was little population beyond Alabama Road in those days. However Mrs Matthews' father, Bert Mitchell (a former Blenheim mayor) predicted that one day there would be houses up to, and on, the Wither Hills.

With her finger on the pulse, she soon saw the potential of Redwoodtown. This involved buying land for expansion, or to finance development, but Mrs Matthews would find the money somehow.  After a purchase had been completed, the family lawyer, Ferg Paterson, was known to say: "What do you want me to buy next week Marj? "

In 1966, the Matthews established The Redwoodtown Shopping Centre Limited Company, with Mrs Matthews wanting young families in the area to have a full range of services. As well as the grocery and Mrs Matthews' drapery shop, there was soon a pharmacy, doctor, two hairdressers, a bakery and a fish and chip shop.

Son-in-law, Graeme Hawtin, admired Mrs Matthews' knack for buying property, but wasn't so happy when one afternoon in the 1980's, they took her to see the new subdivision at Morrington Terrace. She cast her eye over the sections and asked the real estate agent to hold the most expensive section until the next day, when she took a reluctant Graeme to arrange a mortgage. When the Hawtins sold the section three years later, its value had increased by 260%.

Mrs Matthews' foresight was again in evidence, when she negotiated the Lotto franchise for the Redwoodtown Drapery in 1987, a business which son Peter still owns. She was also involved in establishing Thursday night opening at Redwoodtown.

Helping people was important to the Matthews. When Mr Matthews died in 2003, the funeral afternoon tea was paid for by a man, whose family he had helped with a long running account and occasional treats popped in with the groceries. After the Inangahua earthquake in 1968 Mrs Matthews gave a woman, who arrived from the West Coast, new warm clothes for her children from her drapery shop.

The Matthews were a partnership, with Mr Matthews allowing his wife the freedom to pursue her career at a time when wives were generally housewives. They had four children, Shirley, Janette, Graeme and Peter, but with the house at the back of the shop and a housekeeper, Mrs Matthews was able to pursue her love of business.

However, family was always at the centre of her life, with happy gatherings, particularly at their baches at Picton and Ngakuta Bay, enjoyed by extended family over many decades. Shirley and Janette say their parents loved to see the grandchildren enjoying themselves in the Sounds.

Mrs Matthews liked business and people, rather than money. In her 80's, she was still helping at the Lotto shop, when a Mystery Shopper, who thought she was in her 60's, scored her 100%.

Mrs Matthews represented Marlborough in basketball from 1936-1942 and represented the province in bowls in the 1970's. She enjoyed good health until her death and will be remembered for her vigour, sense of humour, kindness, love of people and family - and her great enjoyment of life.

This obituary was written by Joy Stephens, and published in the Marlborough Express in April 2011. Updated May 2020

Want to find out more about the Marj Matthews of Redwoodtown ? View Further Sources here.

Available on Papers Past: