You are here:  Your Story » The Morgan family or the Rabbit Island Skeletons

The Morgan family or the Rabbit Island Skeletons

I had nearly finished all I was intending to do on one branch of our family history, when I found out that my mother-in-law did not know anything about her ancestry – including her grandparents.  She only knew her mother’s name and where she was born. This was a challenge I could not refuse. I followed all the usual lines to trace her ancestors back, and quickly found out that her family had emigrated to Nelson in the very early days of European settlement. 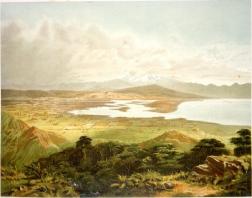 It is thought, from later information, that the eldest three boys were from one marriage and the younger four girls from the second.

At some stage later in 1842 the family travelled up to Massacre bay (now Golden Bay), where they lived among a Māori community, and were involved with an altercation there. The family were unharmed, apparently because they had mixed in well with the local Māori.

The family's time in Nelson was short-lived, however, as I found when searching through Papers Past for clues.

In 1843 the parents and one daughter were travelling down the Coast from Massacre Bay to Nelson, where the daughter, dressed in her wedding finery, was to be married. The boat was piloted by Paolo Portello, a Maltese, and a crewman called Pelham. Portello had been a crewman for Captain Wakefield.

Tragedy struck the boat at the mouth of the Waimea, where Māpua is now sited, when it was upset in rough seas and the Morgan family were all washed overboard. Portello and Pelham escaped.1

Information I had from other family members suggested that the bodies were never found. However, as further editions of Papers Past came online I discovered that John Barnicoat had come across the bodies (it was not confirmed that it was the Morgans, but seemed likely), as part of his surveying of the area.2

I obtained his diaries for the relevant time – they made rather gruesome reading, however he gathered the body parts together and reburied them above the high tide mark, where they were to lie for over half a century.

Sept 25:   A showery day. On chaining along the beach, we found a human skeleton having a large portion of flesh still adhering to the bones, the entrails, heart etc. We supposed it to be the remains of the young woman who with her father and mother were drowned on this beach about two months ago. The party were on their way from Massacre Bay to Nelson where the young woman was to have been married immediately. We found her caps and other portions of the wedding finery.  The skeleton was headless – we found a skull a few chains apart without the under jaw but with a small portion of hair still adhering to the skull.

Sept 29: We found several human bones those of the arm and leg, the joints of which were not separated.

Oct 8:  We took the boat this evening to the Waimea Mouth to bring away Mr Tuckett, but did not find him. We saw a little six sided boat rude in her construction certainly, to be applied to the purpose of a ferry boat on the Wairoa connecting the districts of Waimea West and Waimea South.

On the boat we found a human leg. On cutting the stocking open I found nothing but sand around the bone and until coming below the boot the flesh was perfect. The skin was loose and peeled off on the slightest touch.3

He gathered the parts he could together then laid them out in a grave above the high tide mark. Here they lay for over half a century, unbeknown to the family they left behind.

It was in 1899 that they seemed to resurface (although I am still trying to determine that this discovery was indeed that of the Morgans), when a fisherman called Mark Grossi came across some buried skeletons on Rabbit Island (Moturoa/Rabbit Island).  Medical examination determined that these were of an adult female and a child (no mention of the man).  I still do not know if any conclusions were reached about who these were, although the Morgans seemed to be the most likely. This does not account for what happened to the father.  The account does state, however, that they were reburied in consecrated ground.4

Going back to 1843, however, the family appeared to have no idea what had happened – only that their parents had drowned. It has also not been easy to find out what happened to the other family members.  As I researched the family more I was able to make contact with some of the more distant family members, and was given a copy of a diary written by Alexander Morgan, at the age of 90; he would have been Richard’s grandson, son of George:

Dad’s father first settled in Golden Bay Takaka, and was there at the time of the Golden Bay Massacre, but being great friends of the Natives, they were not molested.  Not long after that they shifted back to the city.  Dad’s father and mother were drowned in a landing accident.  Dad was the eldest of the family and from then on they seemed to have drifted apart.  Dad has told me that he does not know what became of the youngest by BEN.  He advertised in all the principle papers of New Zealand and Australia and never found him.  You can just imagine three boys and one girl left all alone in a new country of wild natives, no wonder we did not get a large slice of this country.  After this happened Dad went into partnership with a man by the name of TOM ASKEW who ran a small boat between Nelson and Wellington with stores etc. but I don't think this lasted very long.  This I think happened about the time the N.Z. Coy went broke and my Dad told me that was the time there was very little food to be had and they dug seed potatoes out of the ground to eat that they had already planted.

Dad has also told me that he worked on the first Survey of Marlborough and on one occasion all they had to eat for a week was one panikin of flour per man until the river went down so they could get across – they had a stash of food on the other side but the river being in high flood they could not get across.  I think it was somewhere about this time that the Maori Massacre happened at Tua Marina Marlborough in which I had two uncles escape.  Their names were JOSEPH MORGAN and WILLIAM MORRISON.  They towed the boat across the river when the tide went out by accident and killed the chief’s daughter which was another Chief’s daughter that was what caused the Massacre.  Seeing what was going to happen they got away and went to the coast where they saw a few Maoris, so they hid until the Maoris got out of sight then they dipped themselves in the sea and then showed themselves and said they were escaped whalers and wanted to get to Nelson, so they gave them some kind of tiki and told them if they saw any other Maori to show them that and they would show them on their way to Nelson, which they did.  This is what my UNCLE JOE   told me when I was just a little boy, that is how they escaped.  There is a record of those two uncles in the Nelson Museum.

The older men in the family can be traced – making some appearances in electoral rolls and other references.

The only reference I found to any daughters was of a marriage in January 1844 of Sarah Morgan to Paolo Portello in the Wesleyan chapel Nelson. She was listed as a minor with no parents given. It appears then, that the child who drowned would have been her twin, Mary. It is possible the younger two daughters stayed in Massacre Bay with the community they had settled in. 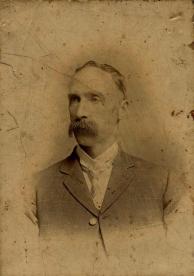 We do know about Joseph, who was away fighting in the Wairau Affray at the time. He delayed giving his evidence at the subsequent enquiry because, when he returned, he found that several members of his family had been killed, so he went to Massacre Bay to be with the remaining members. This clearly linked the Morgan family with the ones who had drowned. He later was one of the key witnesses into the events at the Wairau, where he had narrowly escaped with his life.5

Our ancestor was George, who was left with his younger siblings to make their own way in the difficult times faced by settlers in the first years of the colony. In the first years he had to eke out a living taking whatever work he could, and eating what food he could scrounge from the meagre supplies available.

In 1857 he married Isabella Fisher, who had come out with her parents Alexander and Ellen Fisher on the New Zealand in 1842 – thus also settlers to Nelson.  They settled in Waimea West, where they stayed until 1893, when they moved to Foxton. Joseph lived with the family for several years until his death in 1891.

I have often thought of this family, and what they went through in those early years, and wondered what happened to the other family members, and whether any of their descendants have tried to trace their history.

On a recent visit to Nelson I visited Moturoa/Rabbit Island, and Māpua , and looked at the area where our family members had lost their lives; somehow the area will never be the same again. As I gazed at the sea a small tear formed in my eye and trickled down my cheek. I picked some flowers in their honour and cast them into the sea which had claimed their lives all those years ago; And I pondered, what would have happened if their lives had not been turned around so drastically that fateful night.

Want to find out more about the The Morgan family or the Rabbit Island Skeletons ? View Further Sources here.

Further sources - The Morgan family or the Rabbit Island Skeletons