You are here:  Your Story » Wairau Bar midden

This story is an edited version of an article written by Steve Austin, Chief Executive of the Marlborough Museum and published in Wild Tomato, 2008

Today the Wairau Bar may appear to be a barren land to the casual observer, with few clues to suggest the abundance of life and activity of earlier times.

In March 1942, during the Second World War, 16 year old Jim Eyles was digging an air raid shelter about 40 meters east of his family's house at the end of the Wairau River's Boulder Bank. Air raid shelters were considered essential at that time, as there was a general sense of anxiety about potential Japanese invasion.  While he was digging out the shelter he came across a range of bones, seashells and stones which had been used for cooking food.

Jim Eyles didn't stop digging and the Wairau Bar archaeological site became one of the most important finds of the twentieth century. Later, work on material from the Bar established that the settlers - ancestors of tangata whenua - were Polynesians with strong links to the Society Islands and the Marquesas. New Zealand was the last significant land mass to be settled and the Wairau Bar is one of our earliest settlement sites. It used to be thought that settlement was established by 1100, and the first arrivals may have come several hundred years earlier. However, recent advances in dating have challenged this view and it is now thought that the Wairau Bar was first occupied in the early 13th century.

As well as a range of Polynesian fish hooks and plants, the settlers brought a distinctive stone tool technology. They also had a culture of personal items for body adornment, which included cylindrical ridged reel shaped necklace units of bone and stone, shells, shark teeth and sea mammals. 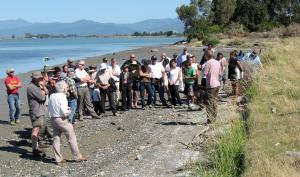 Study of the layers of archaeological deposits and sub-surface structures show that the early Māori settlers had an extraordinarily varied diet. The kitchen middens found on the Wairau Bar contained the remains of seals, birds (including moa, giant eagle and large swan), fish, kuri (Polynesian dogs), tuatara, and kiore (Polynesian rats).

Seals were abundant and porpoises were harpooned with stone and bone harpoon points similar to those found on the Marquesas. Large skate, sunfish and sharks would also have been harpooned, while smaller birds (including the now extinct crow) were snared, speared, skewered and roasted.

The Wairau Bar was rich in inanga, eels, flounders and shellfish, with abundant firewood for cooking.

Between 400 and 500 years ago, the large swan and moa associated with the Wairau Bar, and a number of other bird species in the rest of the country, became extinct due to hunting and habitat destruction. With the extinction of moa, the predominant food of the giant eagle was lost, leading to the inevitable extinction of the eagle.

This article by Claire Connell is reproduced with the permission of the Marlborough Express - first published 06 Jan 2009, p.1

History was made on the Wairau Bar ... as archaeologists began a three-week excavation to return the contents of graves taken up to 70 years ago.

Digging was due to begin ... after Rangitāne welcomed 80 visitors, including archaeologists, with a powhiri ... The two-hectare site is being prepared for the return of Rangitāne tupuna (ancestors' bones) and artefacts - taken from the site for display and study purposes between 1938 and 1959 by the Canterbury Museum. The excavation is the first stage in the tupuna return.

The project is a partnership between Te Rūnanga a Rangitāne o Wairau, the museum, the Department of Conservation and the University of Otago. Fifteen archaeologists will camp on the bar in tents, alongside five Rangitāne iwi members.

Rangitāne development manager Richard Bradley welcomed the visitors. He said after the powhiri that "pointing the finger" was not important any more. "We acknowledge the past, but today is a celebration."    He said the project was a Marlborough community effort, not just a Rangitāne one.

Rangitāne chairperson Judith MacDonald said the morning had been fantastic, and it was "another piece of the puzzle to bring our people home". She said her ancestors had worked hard for the tupuna return.

During the powhiri, University of Otago anthropology department associate professor Richard Walter, who will lead the excavation, said his team was focusing on a "low impact, high return" attitude. He encouraged Rangitāne iwi to visit the site, ask questions and welcomed them to visit the tupuna at Otago University until their return to Marlborough in late March or early April.  Dave Hayes, of DOC, said: " It is a privilege to be involved in the project - it is the making of history."

Peter Johns, who was a student biologist on the site in May 1959, said returning to the site had been a personal voyage for him. He said the team did their best in the "conditions of the day".